With the 4th smallest population in the world Palau are one of a tiny handful of countries who remain outside the FIFA family. Spread over thousands of square miles in the Pacific Ocean the republic gained independence as recently as 1994, but the Palau Football Association was not set up until May 2002. Charles Mitchell arrived on Palau in 2007 having been raised in America where he played college football in San Diego. Mitchell began working with the PFA shortly after he moved to Koror, the capital, and is currently in charge of the association as well as the national team. When Mitchell arrived on the islands football was almost non-existent but together with a committed group of volunteers the league has been revived and an inter-island youth tournament created. 5 teams took part in the 2012 domestic season with Taj running out winners of the fall league after they saw off New Stars in the playoff final.


On the international front much mystery and confusion surrounds Palauan football. The PFA was formerly an associate member of the Oceania Football Confederation, a membership that seemingly expired in the immediate years after their formation in 2002.  However, the OFC released a statement after their 2006 congress saying that Palau had been admitted as "new associate members". This lack of clarity is only further clouded by the fact that the PFA are currently very much not a member of the OFC. Much intrigue surrounds the national team too, a statisticians wonder as they sit bottom of the non-FIFA rankings. Their only outings to date came in the 1998 Micronesia games, which they hosted, but in the only 2 games which could be classed as internationals they were crushed 15-2 by Guam and 12-1 by the Northern Mariana Islands respectively. Little is known of this team other than they were managed by an American and that Stephen Stefano, a name Mitchell can’t locate anywhere, was the star player.

In September 2009 an East Asian Football Federation press release included the news that the PFA had requested to become a quasi-member of the organisation, suggesting Palau were attempting to join FIFA via the Asian Football Confederation much like their Pacific cousins the Northern Marianas are in the process of doing. This intrigued non-FIFA observers but, typically, this request was never heard of again and 4 years on there was no news from the EAFF on the Palauan plea for help. In a further twist to the tale the Palau National Olympic Committee made the shock call last year to tell the PFA that they must join the OFC, not the EAFF.

We spoke to Charles Mitchell to find out the difficulties of his job, and to learn what the future held for his association and national team.


NFFU: Last year the Palau National Olympic Committee told your association that you must join the OFC, instead of the EAFF which you attempted to become quasi-members of in 2009. Why did they make this decision?

CM: The Olympic Committee weren't actually aware that we could apply to join the EAFF, so they made this decision.

NFFU: What was your reaction to this call by the Palau NOC? Would you have rather tried to join the EAFF like Guam and the Northern Mariana Islands?

CM: My first reaction was confusion because of the situation with the Guam National Olympic Committee. They are part of Oceania but Guam Football Association are members of the EAFF.

NFFU: So how have your attempts to join the OFC gone? Have you had good correspondence and communication with them?

CM: There has been no response on the OFC end. We've tried to contact them many times and still we get no response from them.

NFFU: So I guess you aren’t hopeful of becoming OFC members soon?

CM: No. Also, after explaining to the Olympic Committee regarding the EAFF, the OFC does not seem a reasonable option anymore. The Olympic Committee have actually now given us the green light to apply to the EAFF. Once we establish a youth league or programme, then we will re-apply.

NFFU:  Palau’s only international outings came at the 1998 Micronesia Games. Football is yet to be confirmed as a sport at the 2014 finals in Pohnpei (Micronesia), but if it is do you plan on taking a Palau team over?

CM: If Pohnpei confirm the sport then there is a high chance we will send a team over.

NFFU: Do you have any preliminary plans to take a national team to the Pacific Games in Papua New Guinea in 2015?

CM: Not at this time no. It could be possible though.

NFFU: Are there many Palauan players competing in the league?

CM: At the moment 20% of the players competing in the Palau Football Association Adult League are Palauan.

NFFU: What efforts have the PFA made to develop youth football on the islands?

CM: We are currently running an after-school camp which is well attended.  We also hope to start a league in the summer.

NFFU: It’s great to see the Palau league running with a healthy number of teams.  Do you have any plans to expand the league in the future?

CM: Yes we do. There is interest from the Nepalese community on the island and they will put forth a team next season.

NFFU: LA Galaxy defender Sean Franklin recently provided the PFA with some help. What sort of donations did he give and how did you get in touch with him?

CM: Sean provided youth shin-guards and cones. He's a friend of mine – back in California we were teammates at college.

NFFU: We understand football was in a state of despair when you arrived in Palau, how have you managed to get the sport back on track? How hard is it to raise money?

CM: Mainly by staying consistent with the programs and slowly developing them. Our biggest way to raise funds is the after-school camps and leagues. Official fundraisers are still in development.

NFFU: Do you know of any Palauan players based overseas?

NFFU: What do you think the next 2 years have in store for the PFA?

CM: The plan is a formed national team, a new youth league and stronger administration.

NFFU: Finally, do you have confidence that you will become FIFA members one day?

There was great news for the non-FIFA teams in the Caribbean last night at the North American governing body's 28th ordinary congress. Bonaire, who applied to join the Caribbean Football Union 2 years ago, were accepted into CONCACAF as associate members. In further positive developments the 4 French overseas departments of Martinique, Guadeloupe, Saint-Martin and French Guiana had their associate status promoted to full membership. Sint Maarten, a Dutch constituent country, received the same treatment.

Bonaire became a special municipality of the Netherlands following the dissolution of the the Dutch Antilles in 2010 and took part in the maiden ABCS Tournament that year. The competition, which features 3 FIFA members Aruba, Curaçao and Suriname, is held yearly and Bonaire stunned the Caribbean football world when the won the trophy in 2011. On both other occasions they finished last but will hope for another strong performance when the host the tournament in their capital Kralendijk this August. The national team will now also be eligible to compete in the Caribbean Cup.

The upturn in fortunes for the non-FIFA sides continued as each association not affiliated with the world governing body were granted full membership. The decision to promote the active French outre-mer teams Martinique (who will play at this summers Gold Cup), Guadeloupe, Saint-Martin and French Guiana comes as little surprise. However the same promotion of Sint Maarten will raise some eyebrows considering their national team hasn't played for 13 years. Each association will now receive greater grassroots help and funding as well as television rights.
Posted by Unknown at 14:08 8 comments:

The Tynwald Hill Tournament will take place in St Johns for the first-time this summer with the non-FIFA competition taking place from 4th-7th of July. The draw took place at the Sefton Hotel in Douglas tonight where the hosts, Isle of Man Premier Division club St Johns United, were drawn with Raetia and Alderney in group B. Group A saw Occitània, Sealand and Tamil Eelam paired together in a tricky looking pool. The tournament falls on Tynwald Day, the 5th, the Manx national day during which the village holds a festival to celebrate the islands independent parliament.

Group A sees 3 N.F.-Board members facing off against each other in what looks set to be a competitive field. Tamil Eelam will open the group on the 4th with an evening game against Sealand, in an intriguing fixture. Occitània will then make their bow at the competition when they take on Sealand, who'll be massive underdogs, the day after which is on Tynwald Day. The Tamils will conclude their group campaign against Occitània, who comfortably saw off the Asian team 7-0 at the 2012 VIVA World Cup, on the Saturday.

Group B looks set to be a more open pool. The hosts St Johns will take on Raetia in the opening game before playing Island Games members Alderney the following day in what's expected to be a bumper crowd at Mullen-e-Cloie. The Manx club are spending a month preparing for the tournament. The Channel Islanders will wrap up the group, as they look for only their 3rd international win, with a Saturday game against the Raetians.

The two groups will be played out from the Thursday to Saturday, with the 5th-place, 3rd-place and final match taking place on the Sunday. St Johns United’s Mullen-e-Cloie ground will host all the fixtures and each game is set to be streamed live on the internet. The organisers have created a website which you can visit for all the information needed – www.tynwaldtournament.com. 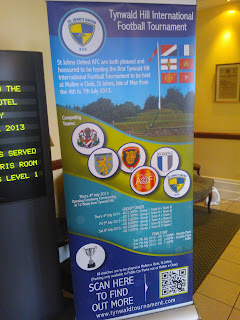